Armitage was part of the great renaissance of British sculpture in the post-war years. Born in 1916, Armitage attended Leeds College of Art and went on to win a scholarship at the Slade School of Art. During the second World War he served in the army, but when this ended, he took up the Head of Sculpture position at the Bath Academy of Art, Corsham, Wiltshire. Along with William Scott (who was Head of Painting), Armitage helped it become one of the most innovative art schools in the country. The art of bronze casting had been in severe decline because of the austerity of the post-war years; Armitage was instrumental in setting up a new foundry at Corsham so that work by students and staff could be cast under their own supervision.

Armitage’s very early works were carved in stone, but in the post-war years he began casting in bronze, initially using plaster modelled on metal armatures, later using clay. In 1952, He was chosen to exhibit at the 26th Venice Biennale as part of a group of young British sculptors including Reg Butler, Lynn Chadwick, William Turnbull and Eduardo Paolozzi. His first solo shows were held at Gimpel Fils, London (1952) and the Bertha Schaefer Gallery, New York (1954). 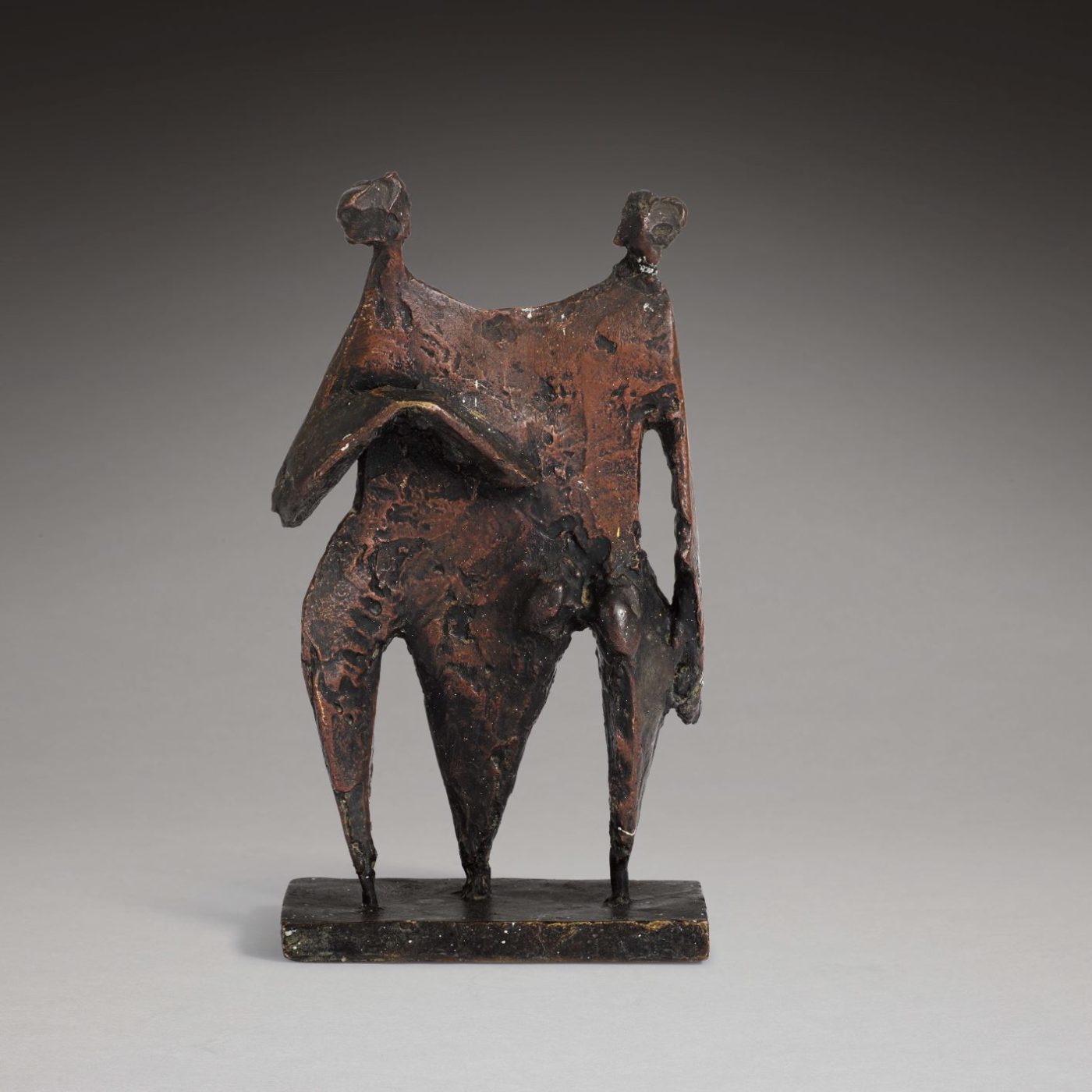 Linked Figures is one of the key compositions Armitage conceived in the run up to the seminal exhibition at The Venice Biennale in 1952. The concept appears in the beautiful pink plaster maquette in The Leeds City Art Gallery (repr.Armitage A Centenary Celebration 2016 pl.5) and was then cast in 2 different sizes in 1960. The larger edition is 99 cm high and unlike in the present version the figures do not share a left leg.

Armitage described the process as ‘’ joining figures together I found in time I wanted to merge them so completely that they formed a new organic unit-a simple mass of whatever shape I liked containing only that number of heads, limbs and other details I felt necessary’’ (Scott and Milburn op cit p.25-27).

Linked Figures is to be seen in the round with the linking being seen either in harmony or in contrast as the line of the neck and the joining of the shoulders can be read as either holding the figures together or apart.

Armitage’s seemingly banal choice of subjects - Figures going for a Walk/Children Playing/People in the Wind , is a radical departure from the previous norms for what was deemed to be appropriate subject- matter. The artist described the process as ‘’figures engaged in a simple everyday activity, combined without needless detail into a single whole with a character and movement of its own’’.