Degas is regarded as an impressionist although he rejected the term, preferring to be called a realist. However, his scenes of Parisian life, his off-centre compositions, his experiments with colour and form and his friendship and involvement with many of the key Impressionist artists, notably Mary Cassatt and Edouard Manet relate him firmly to the Impressionist movement.

Degas had a rigorous academic training and initially wanted to be a history painter. He was a superb draughtsman, particularly adept in depicting movement whether in his portrayal of dancers, racehorse subjects or nudes. In 1855 he met Ingres, who Degas revered and whose advice he never forgot “Draw lines, young man, and still more lines, both from life and from memory and you will become a good artist”.

Degas never married and by old age was an increasingly isolated and divisive figure. 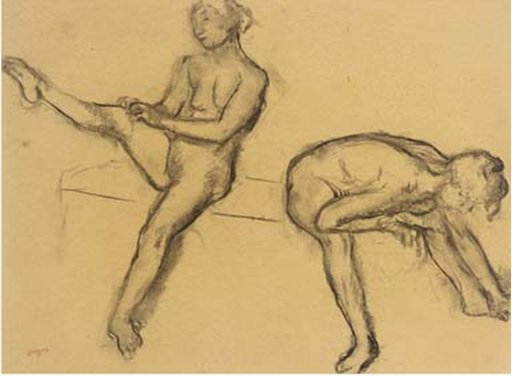 This work relates to the painting, La Salle de danse, circa 1885, in the permanent collection of The Yale University Art Gallery, New Haven.