Harold Gilman was a painter of interiors, portraits and landscapes and founder member of the Camden Town Group.

Born at Rode in Somerset, he was the son of John Gilman, curate of Rode. Gilman spent his early years in Kent after his father secured the living of Snargate with Snave in Romney Marsh. During a period of childhood convalescence, Gilman developed an interest in art but did not begin his artistic training until after his non-collegiate year at Brasenose College, Oxford. In 1896 he entered Hastings School of Art but in 1897 transferred to the Slade School of Fine Art in London, where he remained until 1901. His contemporaries at the Slade were Spencer Gore, Wyndham Lewis, Augustus John and William Orpen and his tutors Frederick Brown, Wilson Steer and Henry Tonks. In 1904 he left for Spain, where he stayed for a year studying the masters – Velazquez and Goya. Both were major early influences, as was Whistler.

Meeting Walter Sickert in 1907, Gilman became a founder member of both the Fitzroy Street Group and in 1911 the Camden Town Group. Gilman stood firmly for reform and advocated consistently the formation of a new society. Despite dying of Spanish ‘flu at the age of forty-three in 1919, his strong-minded and ardent personality meant that he had a lasting impact on the British art scene at the beginning of the twentieth century. 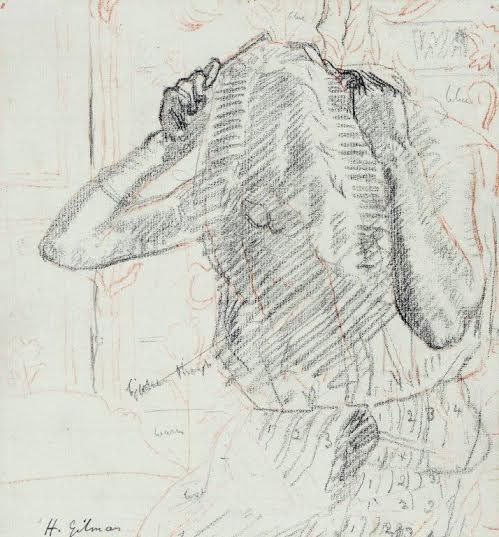