Born in Denham, Buckinghamshire, he was the son of the artists William Nicholson and Mabel Pryde. From 1938-51 he was married to the sculptor Barbara Hepworth.

Nicholson studied at the Slade School of Fine Art from 1910-11, spent 1912-14 in France and Italy and was in the USA in 1917. Nicholson lived in London from 1932-39, making several trips to Paris between 1932 and 1933, visiting the studios of Picasso, Braque, Arp, Brancusi and Mondrian. From 1939-58 he lived and worked in Cornwall, before moving to Switzerland. With war in Europe imminent he had moved from London with Hepworth and their three young children to St. Ives, which had long been a magnet for artists. Naum Gabo, took refuge there, staying until 1946. Gabo had lived near their London studio, as had Henry Moore, Piet Mondrian and the writer Herbert Read. Nicholson returned to London to Hampstead in 1974 to what would be his last home.

Nicholson’s earliest paintings were still life subjects, influenced by his father’s work. In the 1920s he began painting figurative and abstract works inspired by Post-Impressionism and Cubism, making his first geometric abstract reliefs in 1933. He first exhibited in 1919 at the Grosvenor Gallery and Grafton Galleries, with his first one-man show at the Twenty-One Gallery, London in 1924.

In the 1950s Nicholson won several prestigious international prizes including first prize at the Carnegie International, Pittsburgh in 1952.  He was awarded the first Guggenheim International painting prize in 1956 and the international prize for painting at the Sao Paulo Bienal in 1957. Retrospective exhibitions have been held at the Venice Biennale and Tate Gallery 1954-55, Kunsthalle Berne 1961, in Dallas 1964, Buffalo 1978 and the Tate Gallery 1993-94.  Nicholson’s work is held in public and private collections in the UK and abroad. He received the Order of Merit in 1968.

In 1924 Nicholson joined the Seven and Five Society, followed by Barbara Hepworth, Henry Moore and later John Piper. In 1935 they renamed it the Seven and Five Abstract Group, holding the first all abstract exhibition in Britain at the Zwemmer Gallery in London. In 1937 Nicholson, Naum Gabo and architect Leslie Martin edited Circle: International Survey of Constructivist Art. A group of like-minded artists and architects, they wanted to apply ‘constructivist’ principles to public and private art, advocating mathematical precision, clean lines and an absence of ornament.

From the mid-1930s until he died in 1968, the writer Herbert Read championed Nicholson’s work, which came to be seen, along with Henry Moore’s, as the epitome of British modernism. 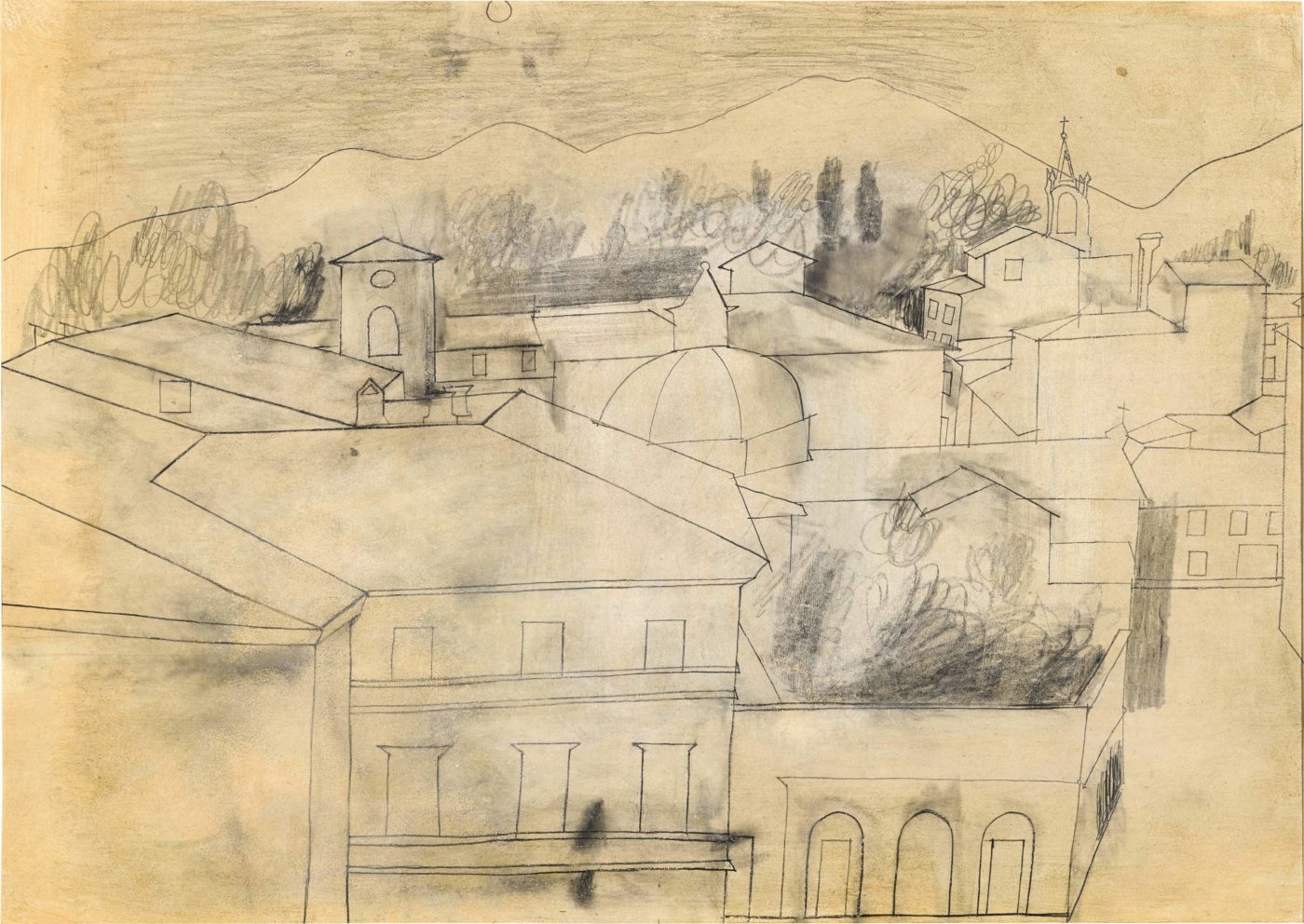 Nicholson was a frequent visitor to Italy from 1950 onwards. He exhibited at The Venice Biennale in 1955 and returned the following year on a trip which included Rome,the coast and many sites in Tuscany. His work August 1956(Val D’Orcia) from that journey won the 1st Guggenheim International award.

Nicholson’s method characteristically was to apply a thin wash of oil to the surface of the sheet before starting on the drawing. Topographical precision was not his intention: Peter Khoroche writing that ‚‘‘laying no claim to a technical or historical knowledge of architecture,what interested him was the shape,the proportion,the lie of a building....Building, like objects,were a starting point only,naturally there was no point in mere imitation‘‘.