Sutherland was an English artist, notable for his work in glass, fabrics, prints and portraiture. His work was much inspired by landscape and religion, and he designed the tapestry for the re-built Coventry Cathedral.

Prints of romantic landscapes dominated Sutherland’s work during the 1920’s. He developed his art by working in watercolours before moving on to using oils in the 1940’s. It is these oils, often of surreal, organic landscapes of the Welsh coast, that secured his reputation as a leading modern artist in Britian. He taught at a number of art colleges including Chelsea School of Art and Goldsmiths College, where he had been a student.

Between 1940-45, Sutherland was employed as official war artist. He recorded bomb damage in rural and urban Wales towards the end of 1940 and then bomb damage caused by the Blitz in the City and East End of London. Sutherland returned to Wales in 1941 to work on a series of paintings of blast furnaces. From June 1942 he painted further industrial scenes, first at tin mines in Cornwall, then at a limestone quarry in Derbyshire and then at open-cast and underground coal mines in South Wales. In 1944 Sutherland spent 4 months at the Royal Ordnance Factory at Woolwich Arsenal working on a series of five paintings for WAAC. In December 1944 he was sent to depict the damage inflicted by the RAF on railway yards at Trappes and at flying bomb sites at Saint-Leu-d’Esserent in France.

He was commissioned to design an enormous tapestry in the new Coventry Cathedral. He also  completed a number of controversial portraits. Sir Winston Churchill famously hated Sutherland’s depiction of him and publicly humiliated him when the painting was unveiled. In 1955 Sutherland and his wife bought a house in Nice and living abroad led to a slight decline in his status in Britain. However, following a trip to Pembrokshire in 1967, his creativity was renewed and that went some way to restoring his reputation as a leading British artist. 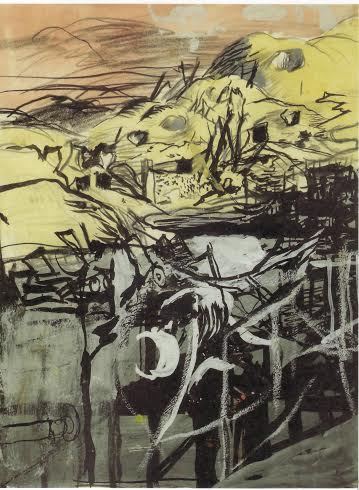 Sutherland’s final act as an official war artist was to visit France in 1944 – the first time he had ever been abroad. He located the flying bomb sites at St.-Leu-d’Esserent, some thirty miles north west of Paris, which had been decimated by the RAF. “I had never seen such a panoramic piece of devastation in my life - for miles the bridges and remnants of houses on either side were like a black hole“. Sutherland wrote that he was particularly affected by a copy of Goethe that he found abandoned on the ground.